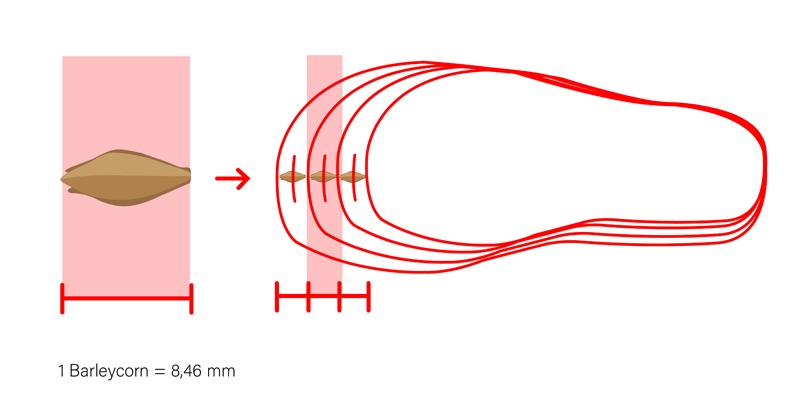 Many hundred years ago, there was no size to follow when choosing a shoe because the shoe manufacturer would personalize the shoe by measuring the customer’s foot directly. With the increase in demand, there was the need to industrialize the shoe manufacturer process and so the need for various shoe last sizes in standard volumes.
The UK was the birthplace of the shoe sizing system referring to barley grains. It is interesting to know that three grains of barley equal an inch, then twelve inches would equal one foot, and three feet would equal one yard. In 1887, the USA and UK brought it further, developing half sizes.
In 1586, Flemish mathematician, military engineer, and physicist Simon Stevin published a small pamphlet called “The Tenth,” which was the basis of modern notation for decimal fractions.
During the 18th century in Europe, each nation had its system of units of measurement. This was becoming a real problem in France because of the inconsistency in measuring products and became one of the causes in 1789, which led to the outbreak of the French Revolution. The metric system was adopted at the end of the French Revolution in 1799. On the other hand, shoe sizes in the United Kingdom, Ireland, India, Pakistan, and South Africa, continue using the barleycorn system where one barleycorn equals 1/3 inch.
In the early 1800, French shoemakers invented a new system of measure for footwear which grew from the metric system and was called the Paris Point or, as it is now called, the Europe system, the French system, or even the continental system. One Paris Point equals 2/3 cm or .262 in.
A third scale was introduced in 1970, trying to unify the UK and European measuring system called the “Mondo point.” Instead of unifying, it created a third measuring system extensively used in Asia. This new system indicates the foot length in increments of 5mm.
FUNCTION: The function of the shoe size is to help the consumers choose the right size independently from which part of the world it originated. As we have seen, there is lots of confusion with various types of measurement systems.
The question now is, how do we keep our customers happy with the proper sizes?
Italian Footwear Solution with 3 generations of experience was able to create the Perfect Fit size. Our sizes are always following the true fit of the foot taking into consideration all the important measurements of the feet and making the Perfect Fit last for all our production shoes.
Always get peace of mind when purchasing Italian Footwear Solution shoes with our Perfect Fit size and high-quality materials for the best experience in look and walk.

During this lesson, we will study the difference between dif..

Everyone should know that wearing the wrong type of shoe or ..

Many hundred years ago, there was no size to follow when cho..

In this lesson we will study the tools and materials we will..

LAST DIMENSIONS In our final last terminology, we will talk..

Register And Get Free Designing Courses