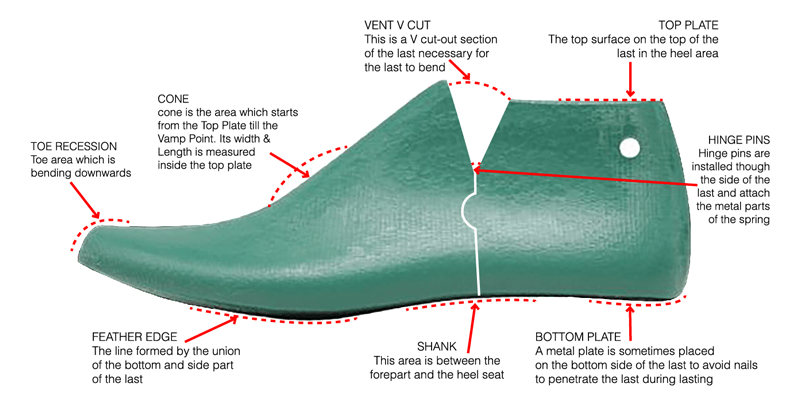 The terminology of the last is important because each specific part of the last has its specific function. If we pass a line from the toe area to the heel of the last in the middle, this line is called the Main Axis which in return divides the last in Medial (large toe) and Lateral side (small toe). Another imaginary line can be made in front and back of the BALL POINT. This ball is the largest part of the forepart of the last which is caused by the junction of the 5th metatarsal-phalange joint on small toe and 1st metatarsal-phalange joint on large toe. The area in front of this ball point is called the FORE PART and behind the BACK PART.

• CONE: is the area which starts from the Top Plate till the Vamp Point. Its width and length is measured inside the top plate.
• HINGE SPRING: This is a metal spring placed inside the last which allows it to bend, so facilitating the insertion or removal from the shoe.
• VENT V CUT: This is a V cut-out section of the last necessary for the last to bend.
• SIZE MARK: Each last is marked with size on the Top Plate which needs to be read from top during lasting.
• THIMBLE: A cylinder hole allowing a metal cylinder to be inserted to help the bending of the last.
• TOP PLATE: The top surface on top of the last in the heel area.
• TOE RECESSION: Toe area which is bending downwards
• FEATHER EDGE: The line formed by the union of the bottom ad side part of the last.
• SHANK: This area is between the forepart ad the heel seat.
• BOTTOM PLATE: A metal plate is sometimes placed on the bottom side of the last to avoid nails to penetrate the last during lasting.
• PLATE WINDOWS: Openings can be made on the metal plate to allow the attachment of nails onto a Tack Hole Plug.

During this lesson, we will study the difference between dif..

Everyone should know that wearing the wrong type of shoe or ..

Many hundred years ago, there was no size to follow when cho..

In this lesson we will study the tools and materials we will..

LAST DIMENSIONS In our final last terminology, we will talk..

Register And Get Free Designing Courses